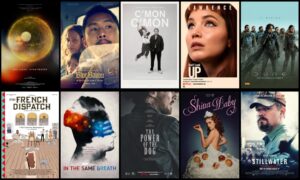 This year warmly welcomed us back to the movies with a wealth of long-awaited releases from both before and during the pandemic. Whether these stories came to us on the big screen or at home, however, the vast perspectives within them were transportive. Often political, intricate, and challenging, many of these films managed to be equally relevant and timeless. Not only were we able to laugh at them, but we were able to laugh with them, cry with them, and, most excitingly, we were able to do so with each other.

I must note there are a handful of late releases I have yet to see which could alter this list, such as Paul Thomas Anderson’s Licorice Pizza, Sean Baker’s Red Rocket, and Maggie Gyllenhaal’s directorial debut, The Lost Daughter, an adaptation of a book by one of my favorite authors, Elena Ferrante. However, in a year filled with such abundance, each spot below remains well-earned.

For the one film here that I have reviewed, I have hyperlinked the title to that review. For the others, I provide a short summary of my thoughts and link to the movie’s website. Below is my list, in alphabetical order: