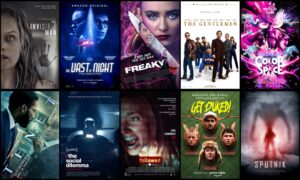 2020 was quite the oddball year, and unfortunately no industry was safe from the strife that the coronavirus pandemic caused. The film and theater industry were some of the worst hit, as major releases were pushed back and movie theatres shut down for a prolonged period of time. Some of my most highly-anticipated releases of the year got rescheduled, including A Quiet Place Part II, a film for which I had my reservation already scheduled for a press screening before it was cancelled at the very onset of the pandemic. So, as I write this list, I realize it will be unlike any other Top 10 list I’ve written, since the selection of films over this year was far more limited than any other in recent memory. However, as with 2020 as a whole, there were a few bright spots in an otherwise dreary year.