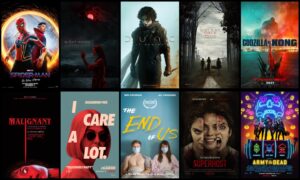 After a down year, in terms of film output, due to the coronavirus pandemic, I was greatly looking forward to 2021. Not only were there many movies that were supposed to have been released in 2020 that would be pushed to this year, but 2021 had its own great slate to offer, as well. In fact, there were so many major films that came out this year that I found it difficult to keep up with them all and admittedly missed quite a few that I would have liked to see. Nevertheless, I was still able to still catch a vast array of amazing offerings, from indies to blockbusters. The below list is comprised of a combination of some films I’ve reviewed for Film Festival Today and some that I have not. For those I have reviewed, I have hyperlinked the titles to my reviews. For those I have not, I provide a short summary of my thoughts and link to the movie’s website. So, without further ado, enjoy the Top 10 films (in order of preference) from what I have seen in 2021!

Matt Patti is a Stevenson University alumnus who graduated with a degree in Film & Moving Image, with a concentration in producing and writing and a minor in communication. He has enjoyed voicing his opinions on films since a very young age. Matt has recently moved to the Baltimore area and currently works full-time as a Video Production Assistant. He also enjoys creating short films with Baltimore-area friends to enter into contests as well as purely for the love of the craft.