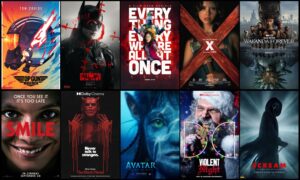 2022 was one of the best years for films in recent memory. Maybe it’s because the last few years, specifically because of the Coronavirus, have not been as great, but 2022 feels better than even some years preceding the pandemic. Or perhaps it’s because I found myself with much more free time this year than in years’ past to check out the wide array of releases making their debut. Yes, many Friday and Saturday nights in 2022 were spent at the movie theater, at the drive-in, or at home catching up on the latest big buzz releases. Furthermore, thanks to many press screenings I’ve attended, I was watching films mid-week as well.

Even though I had the pleasure of viewing many, many films this year, I still feel like there are a select few major releases that I’ve missed, specifically releases in November and December. For example, I did not get the chance to view The Menu or The Fabelmans, and I do very much believe both would’ve made the list had I got the chance to see them before 2022 ended. Nevertheless, below is my list of top 10 films that I’ve seen this year. Some of these I’ve reviewed for Film Festival Today, and for those I hyperlink the title to my review. For those that I have not reviewed, I include a short synopsis of my thoughts.

1. Top Gun: Maverick (Joseph Kosinski): My favorite film of the year is one I wasn’t even planning on viewing, initially. I had never seen the original Top Gun, but the hype and buzz around Top Gun: Maverick pushed me to watch the original in preparation for checking out the new one. I found the original film not anything to write home about, so I didn’t have the highest hopes for Top Gun: Maverick, even with the great reviews it was receiving. However, I was dead wrong. To say I was blown away is an understatement. Top Gun: Maverick completely exceeded my expectations, becoming not only my favorite film of the year but one of the best films I’ve seen in recent memory. It has it all: compelling characters, exceptional performances, palpable intensity and thrills, stunning visuals and stunts, and above all a feeling of excitement, wonder, and awe that I haven’t experienced from a film in quite some time.

3. Everything Everywhere All at Once (Dan Kwan/Daniel Scheinert): One of the most creative films, both with its visuals and with its storytelling, that I’ve ever had the pleasure of seeing, Everything Everywhere All at Once is a beautiful exploration of identity, self, and alternate realities that bring the question “what could have been” into a new light. Bolstered by impressive performances and wacky-yet-gripping set pieces, the film is an unforgettable experience that is a delight to the senses.

4. X (Ti West): My favorite horror film of the year was not the scariest (in fact, I find the two other horror films lower on this list much more frightening on the surface), but the mix of awkward humor, discomfort, and strong sympathy for the main characters separate this one from the pack. X’s themes stick with the viewer long after the credits roll, and in a much deeper manner than any surface-level scare fest.

5. Black Panther: Wakanda Forever (Ryan Coogler): A nearly impossible task was given to director Ryan Coogler with this Black Panther sequel: create an engaging follow-up to the original film with the absence of the main character that the franchise is based on. Coogler passes with flying colors, though, as Black Panther: Wakanda Forever manages to function as a touching tribute to the late Chadwick Boseman (and his character, T’Challa) while also introducing an enthralling plot of its own, complete with a layered, compelling villain and some top-notch action sequences.

6. Smile (Parker Finn): Effectively creepy and at times downright terrifying, Smile is the most horrifying film of the year, which is music to the ears of this horror fanatic. Smile goes the extra mile, though, as it is not only quite scary, but also features some fantastic tricks, twists, and turns along with a great performance from Sosie Bacon.

7. The Black Phone (Scott Derrickson): With an unnerving but applaudable performance by Ethan Hawke, a unique and gripping script, some unconventional and crafty filmmaking techniques, and a whole lot of tension and suspense, The Black Phone is a surprise horror hit with a vintage feel to it.

8. Avatar: The Way of Water (James Cameron): The long-awaited sequel to one of the most successful films of all time, Avatar: The Way of Water is 13 years in the making. Surprisingly, it surpasses the original film with more intriguing characters, a slightly more original plot, and an overall superior emotional investment for the audience. Oh, and, of course, the visuals still dazzle as well.