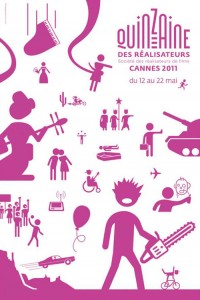 The Directors Fortnight (Quinzaine des Realisateurs) is one of the most prestigious sidebar sections of the Cannes Film Festival. Yesterday, it revealed its lineup, always of strong interest to the international film community looking for the next big arthouse hit. This year, 21 feature films and 14 shorts and 4 special screenings will make up the program, which has an unusually strong representation of European titles (including many French films), with a smattering of Asian and South American entries as well. There is a single American film and none from the United Kingdom, Spain, Eastern Europe, Mexico, Japan, China or Australia. In fact, this is probably the most Euro-centric program in many years.

A modern drama freely based on real events. One sweltering afternoon in the south of France, four lives intersect: those of Stéphane and Luigi, two cousins barely out of adolescence, Georges, a retired worker, Amelie, Luigi’s girlfriend, and Anne, Amelie’s mother. Four mundane lives full of hurts, humiliations, fears and fatigue which converge on a tragedy.

Roman Kogler, 18, is serving time in a juvenile detention center.  He has already served half of his sentence, and could be released on probation, but his chances are poor: he doesn’t have family, and seems incapable of coping with society. After many failed attempts, Roman finds a probation job at the municipal morgue in Vienna. One day, Roman is faced with a dead woman who bears his family name. Even though it soon turns out that she is not his mother, Roman wonders about his past for the first time and starts looking for his mother.

One morning, Bafiokadié and his sister Téné, two African children, leave their village. The only thing on their mind is to find their lost blue bird before the day is over. But they will find much more along their way: they encounter their deceased grand-parents, they fight the soul of the forest and learn from the Chief of Pleasure. Everyone tells them a story about life and death. At the end of their long journey, the brother and sister enter the Kingdom of the Future and meet some yet-to-be born children. Delighted with this discovery, they eventually return home. “Blue Bird” is a story about how one day in a child’s life can change its world. For as we lose something we gain something.

Busong is the indigenous Palawan concept of Fate or instant Karma. Nature reacts instantly to man’s disrespect of nature and other men. Punay was born with wounds in her feet so that she cannot step on the earth. Her brother, Angkarang, carries her through a hammock, as he searches the changing landscape of Palawan in hoping to find a healer who can cure Punay. Different people help him carry his sister along the way- a woman looking for her husband, a fisherman who lost his boat and a young man who is searching for himself- and each one meets their fate. This is the first Palawanon indigenous film.

In a forest, near a border, a young Bengali and a European soldier attempt to get the better of one another. In Calcutta, Rahul, an architect who had gone off to build a career in Dubai, begins a huge construction site. He is reunited with his girlfriend, Paoli, who has long awaited his homecoming, living alone far from her family. Both set out to find Rahul’s brother, who is said to have gone mad and who lives in the forest and sleeps in thee trees.

Marian, a middle aged nurse, devotes herself to her patients like a saint. Sometimes she even takes on the role of a redeemer, by helping the gravely ill to the soothing order of ultimate silence. When she gets linked to a neighbor in an act of common voyeurism, she becomes fascinated by him. Faced with the fragility of these newfound emotions, Marian surrenders to her human needs…

13 year old Marta who is struggling to resettle to the south of Italy after ten years growing up in Switzerland. Bright-eyed and restless, she observes the sights, sounds and smells of the city but feels very much an outsider. Marta is about to undergo the rite of confirmation and she takes catechism but confronts the morality of the local Catholic community. From experiencing her period to making a bold decision to cut her hair, Marta begins to shape her own life for the first time since moving back to Italy.

The coming of age story of a 67 year old man. When Hannes retires from his job as a janitor the void that is the rest of his life begins. He is estranged from his family, hardly has any friends and the relationship to his wife has faded. Through drastic events, Hannes realizes that he has to adjust his life in order to help someone he loves. Eldfjall is a love story about dealing with the choices of the past and the difficulties of the present in order to embrace the future.

Iris is 16 and finishing up her teenage years a small provincial town when she meets Jean, a 40 year old photographer from Paris. Over the course of their meetings, their relationship evolves to an amorous friendship that will turn their lives upside down.

Francis arrives in Venice seeking peace and quiet to write his next novel.Looking to rent a small apartment, he meets Judith a real estate broker. For Francis, it’s love at first sight. Judith insists that he should see a remote house on San’t Erasmo island. Taking the plunge, Francis says”if we move in together, I’ll sign right away”. So begins their life as a couple. Totally euphoric, Francis can’t set his mind to writing. But, is his happiness so secure ? While he isn’t working, what does Judith do with her day ? Francis hires Jeremie, a young offender fresh out of jail, to tail her. What will Jeremie find out?

In the automn of 1430, Jeanne d’Arc, prisoner of a powerful lord of the north of France, is sold to the English. Between the walls that imprison her and the stake at which she will perish, men attempt to approach this young woman who embodies the infinite.

Dom works the night shift in a small hotel near the industrial sea port of Le Havre. One night, a woman arrives with no luggage and no shoes. Her name is Fiona. She tells Dom she is a fairy and grants him three wishes. Fiona makes two wishes come true then mysteriously disappears. Dom, who by then has fallen in love with Fiona, searches for her everywhere…

A remote house in the Vosges mountains. Jean, second son of the Klein family, won’t work or study. Violent quarrels break out, as on that morning when Jean went to the chalet of Nils and Ida. During a hunt, he learns how to kill. The following night, his mother’s car is torched. He is held responsible. Jean disappears into the forest, making threats.

It’s summertime; Zak and Seth find themselves dead broke and ditched by their absentee mother in the family’s cottage. Just like every holiday, they’ve resigned themselves to another shitty summer. But things change this year, when they meet Danny, a local teenager. Together, with life at their fingertips, they begin the great perilous journey of their lives.

Confined to a universe that stretches only from bed to wheelchair, Porfirio – a man in diapers who sells call time on his cell phone in a faraway city on the outskirts of the Amazon – dreams that he can fly.

Back from a tour of duty, Kelli can’t wait to rejoin her old life in the rust belt town she’s always lived in. She’s ready to experience the old feelings of everyday life- the carpet under her bare feet, a cold beer in front of the television, the smell of her baby’s head. Slowly, though, she realizes that her everyday life doesn’t resemble the one she left. Struggling to find her place in her family and the rust-belt town she no longer recognizes, what can she reclaim of her share of the way of life she’s been fighting to protect?

The “board” of the title is multifold: springboard, diving board or pirate plank. This is the story of an imperiled “brotherhood,” the story of a foursome. The story of four girls on the run, made of love, choices, shattered destinies.They are the protagonists of a film noir under the conflicting auspices of the dream of globalization.

Sophie and Daneel, both in their early thirties, are a close and passionate couple living in Paris. Sophie initiates a surprise journey to Bulgaria. Daneel explicitly refuses to go, but Sophie insists and finally convinces him to leave. When they arrive, Sophie discovers that Daneel was born there…. The heat and the strange few inhabitants soon alter their own behaviors, and the island slowly reveals hidden fears that question their love. To get through it all, they have to take a leap into the unknown…

THE OTHER SIDE OF SLEEP (Rebecca Daly, Netherlands/Hungary, Ireland)

A sleepwalker since childhood, Arlene works in the local factory of the small Irish rural town she grew up in. When a young woman is found dead in the woods, Arlene immediately channels her own mother’s disappearance, twenty years ago. Increasingly drawn to the girl’s family – her accused boyfriend and grieving sister, Arlene barricades herself in at night, depriving herself of sleep. Deep in emotional turmoil, her sleeping and waking realities soon blur, as the community searches to find the killer.