SHE MONKEYS, a coming of age film with sexual undertones from Swedish director Lisa Aschan was named Best Narrative Film at the 10th Tribeca Film Festival, which ended its 12 day run yesterday. The film, which won a top prize at the Gothenberg Film Festival and the Teddy Award as best gay film at the Berlin Film Festival earlier this year, is a hothouse story of emerging sexuality set amongst teenage girls in a horse acrobatics training school. Competition, both athletic and sexual, becomes the cornerstone of the relationship between two of the blond teenage girls, with the director creating an atmosphere of both dread and sexual excitement as the two push and pull to each other’s rhythms. The lucky director leaves New York with a $25,000 cash prize and an original painting by abstract artist Robert De Niro Sr, the father of Tribeca don Robert De Niro. The ceremony was held at the W Union Square Hotel in Manhattan on Thursday evening.

The award for Best New Narrative Director went to Park Jungbum, writer-director of the South Korea film THE JOURNALS OF MUSAN, the story of a North Korean defector who forges a new life for himself in go-go capitalist South Korea. Kivu Ruhorahoza, the Rwandan writer and director of the drama GREY MATTER, received a special jury mention. That film’s lead actor, Ramadhan “Shami” Bizimana, won the Best Actor prize for his role as a filmmaker trying to come to grips with the tragedy of genocide in his homeland. Best Actress honors were won by Dutch thespian Carice van Houten for her portrayal of a doomed South African poet in the film BLACK BUTTERFLIES. Luisa Tillinger was named Best Cinematographer for her haunting work in the Mexican film ARTIFICIAL PARADISES. A saucy script about teenage sexuality won a Best Screenplay prize for Norwegian scribe Jannicke Systad Jabobsen for the film TURN ME ON, GODDAMMIT (easily the Festival’s best film title). 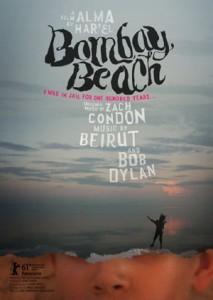 BOMBAY BEACH, a documentary about the hardscrabble community that scratches a living on the site of the former Salton Sea in a desolate corner of California, won the Best Documentary prize, which also has a $25,000 cash award. Israeli director Alma Har’el has crafted an artistically innovative film—-a dreamlike poem that combines observational documentary technique with choreographed dance sequences and haunting music, and a cast of memorable characters who inhabit the atmospheric ghost town. Documentary prizes were also awarded to Purcell Carson for Best Editing for the film  SEMPER FI; ALWAYS FAITHFUL and to Pablo Croce as Best New Documentary Director for the martial arts film LIKE WATER.

For more information on these and other films at the 10th Tribeca Film Festival, visit: www.tribecafilm.com