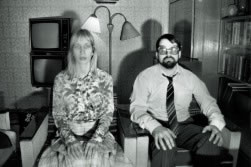 One of the key purposes of POFF, the Tallinn Black Nights Film Festival is the presentation of local Estonian and Baltic production to the international press and industry and, of course, for the public. Nine films in all were featured in the Tridens Baltic Feature Film Competition, with a strong showing from Estonia (by far the most prolific Baltic film industry) and representation from Lithuania and Latvia.

As Festival Director Tina Lokk wrote in an introduction to the section in the Festival Catalogue, “the recession – the masu as we call it in Estonia – can certainly be felt in terms of the number and artistic quality of the films participating in the programme. Selecting films from Latvia and Lithuania, which have been hit harder, was a complicated task. No doubt it will be even harder next year, as there simply is not enough money for making films. Yet the programme does include two films from Lithuania, one from Latvia and a record six films from Estonia.”

The films offer a range of genres and filmmaking styles, with feature debuts by a new generation of young filmmakers. While they are all quite different, their unifying thread is how political, social and economic turmoil affects the inner lives of their protagonists and their relationships with friends, family and communities. Some of the atmosphere is dark indeed but in the hopes that the future will bring new opportunities and pathways, the films are not afraid of presenting a glimmer of hope amidst the doom and gloom.