One could call it a documentary deluge…….IDFA, the International Documentary Film Festival Amsterdam, the world’s largest event devoted to the non-fiction form, is expecting over 2000 international guests over the next 10 days. If you are in and into docs, Amsterdam is ground zero for film premieres, special events, chic parties and industry seminars and networking sessions.

The Festival has clocked in some 2200 accredited guests from The Netherlands and around the world to attend the 22nd IDFA. In addition, a large number of documentary professionals will visit the FORUM and Docs for Sale markets, which will also be taking place next week.

The Festival, which opens this evening at the historic Theater Tuschinski, will include a large cadre of celebrated documentary filmmakers, including such icons as Frederick Wiseman, Dariusz Jablonski, Eyal Sivan, D.A Pennebaker and Julien Temple. On Sunday, Iranian filmmaker Maziar Bahari will be at the festival to talk about the current situation in Iran and his detention following the elections there. 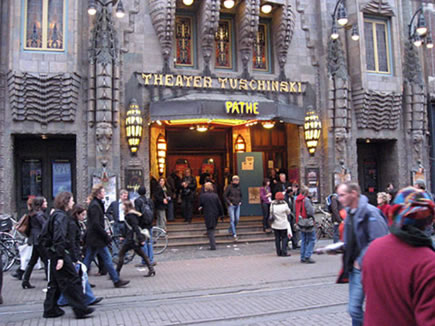 Alongside filmmakers, a number of people featuring in documentaries will also be present, such as Sebastian Marroquin (from Nicolas Entel’s Sins of My Father), Raymond Kurzweil (from Barry Ptolemy’s Transcendent Man), Norman Finkelstein (from American Radical: The Trials of Norman Finkelstein), Yoshiro Nakamats (from The Invention of Dr. Nakamats) and Mike Bonnano (from The Yes Men Fix the World).

For information on all the festivities, visit the Festival’s website: www.idfa.nl