As a festival that is keyed into its New York surroundings, it is no surprise that the Tribeca Film Festival, which is now mainly based in the Chelsea and Greenwich Village neighborhoods of downtown Manhattan, should offer a good variety of films that are gay and lesbian-friendly (Chelsea, for you out-of-towners is gay central in Manhattan). Films with gay themes are always popular because their devoted fan base (gay people and those who love them) are always enthusiastic supporters of the genre. Finding new stories and symbols on the big screen has long been an obsession of this community and has always been a reliable spur for turning out the gay masses for films that may never be seen again following this week’s Festival smorgasbord.

The films, a diverse bunch to be sure, are equally divided between the documentary and fiction arenas. Tribeca has always had a strong documentary program and this year’s group is up to its high standards. In THE BALLAD OF GENESIS AND LADY JAYE (directed by Marie Losier), the filmmaker created an atmospheric and romantic profile of the physical and spiritual bonds between pioneering musician and performance artist Genesis P-Orridge and his soul mate Lady Jaye. The US/French co-production demonstrates the impulse and connection between an artist and his muse in the world of downtown avant-garde anarchy that stretches the traditional boundaries of sexuality and gender identification.

THE BULLY PROJECT, directed by Lee Hirsch, takes a hot-button topic (bullying in schools) and gives it an immediacy that will shock and motivate audiences. More than 18 million young people in the U.S. will be bullied this year. Several bullying incidents have made the news with terrible consequences of suicide or other less final traumas. The film, which already is generating strong buzz as an Audience Award contender, follows several students over the course of a school year and illustrates the emotional high wire act that they must face each day just merely to survive. Many are taunted as being gay, whether it is true or not, giving full evidence that homophobia in the classroom is not a rare occurrence. As teachers and parents struggle to find the answers, the film is a call to action for a nationwide explosion of violence and intimidation.

Equally intense, the film GONE, directed by Gretchen and John Morning, is a riveting, confessional documentary about a retired New York City cop who searches for her missing gay son in Vienna. She encounters a homophobic police force, unexpected discrepancies in the investigation and suspicious circumstances that make this film as much a thriller as it is an expose of official indifference. 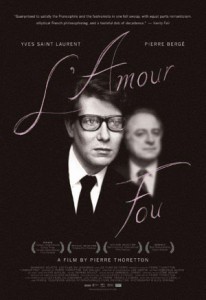 Two portrait documentaries give incisive and moving accounts of their protagonists. In L’AMOUR FOU by French director Pierre Thoretton, the intimate relationship between fashion guru Yves St. Laurent and his long time life and business partner Pierre Berge is uncovered. After St. Laurent’s death, his partner made the difficult decision to sell off their immense collection of precious art. The film skillfully uses their private possession as puzzle pieces to form a tender and inviting look into the private world of an icon and the man who loved him. In RENEE, one of the scandals of the 1970s is relived, in  the story of transsexual tennis star Renee Richards. Delving into his/her personal story and the reactions of family members and other associates to Richards’ sexual reassignment surgery, the film, produced by ESPN Films, also details her struggles with the tennis establishment who had never before faced a similar situation in its 70 years of play. The film contrasts the personal and professional struggles with immense empathy as it offers a moving portrait of a person whose personal decisions have been a source of both pride and pitfalls.

Fiction films with gay themes have become more a rare bird these days after their initial flourish in the 1990s, so it is encouraging that a number of new feature titles are being prominently showcased at Tribeca this week. In ANGELS CREST by director Gaby Dellal, the “modern family” of a single working class father and his three-year-old son is put to the test in a small Rocky mountain town where all the neighbors know everyone’s business. A strong ensemble cast led by Jeremy Piven, Elizabeth McGovern, Mira Sorvino and Kate Walsh make this one of the more intriguing new indie titles at the Festival. The notion of what the ideal family should be also haunts THE PERFECT FAMILY, a debut directorial nod by Anne Renton. In this sweet family drama, a devout Catholic (played by that force-of-nature Kathleen Turner) must prove  that her family conforms to the image of  the “perfect family” in order for her to be named the Catholic Woman of the Year. The fact that this family is anything but perfect is brought out via clever dialogue and a sharp cast that includes Emily Deschanel, Jason Ritter, Richard Chamberlain and Michael McGrady.

Two striking Spanish language films round out the gay-themed program. In MY LAST ROUND, written and directed by Chilean filmmaker Julio Jorquera, a successful boxer falls in love with a kitchen hand, as they move from their small town in the south of Chile to the capital city of Santiago. When their clandestine relationship begins to crumble under the weight of secrecy, the macho boxer with a secret throws himself into a high-stakes boxing match. The handsome cast and evocative cinematography make this a sexy film in the tradition of BROKEBACK MOUNTAIN and THE FIGHTER. 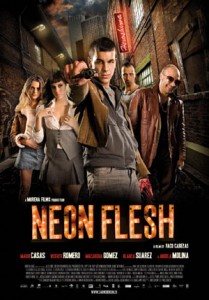 NEON FLESH, the feature debut of Spanish filmmaker Paco Cabezas, centers on Ricky, a young hustler who was left to a life on the streets when his hooker mother was sent to jail. Now that she will soon be released, Ricky enlists a couple of buddies to help him open up a whorehouse as a tribute to his mother. An intoxicating mix of edgy crime drama and outrageous underground pastiche, the film is sure to engender comment and controversy. How far should a son go to please his mother? Pretty far, I guess, based on this unusual and unexpected film. But finding stories that are not your typical cookie cutter are exactly for ravenous gay audiences are looking for….and which Tribeca valiantly delivers.