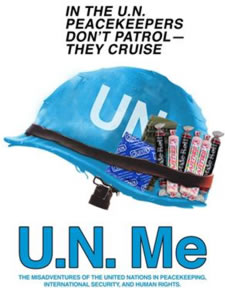 The American documentary U.N. ME, a lacerating look at the inefficiencies of the United Nations, has its word premiere at the IDFA International Documentary Festival Amsterdam this week. In a film that exposes the incompetence and corruption at the heart of the United Nations, filmmakers Ami Horowitz and Matthew Groff show how an organization created to ennoble mankind now actually enables evil and sows global chaos.

When the United Nations was founded more than sixty years ago, it embodied our hope for a safer, more peaceful world. But as reports of human rights violations and international conflicts make daily headlines, a question arises: Is the United Nations living up to its founding ideals?

U.N. ME takes audiences on a harrowing and darkly humorous tour of the U.N.’s scandalous disregard for the people and principles it was founded to defend. Among the revelations in this expose are: the story of how a U.N. peacekeeping force stationed in Cote d’Ivoire fired into a crowd of unarmed protesters, injuring and killing dozens; how the largest U.N. humanitarian effort ever conceived, the Oil for Food Program, devolved into a money-grubbing international scam; how the organization that should be at the forefront of efforts to eradicate terrorism cannot, seven years after 9/11, agree on a definition of “terrorism.”; and how the U.N.’s Human Rights Council prolonged the genocide in Darfur by attempting to discredit the urgent recommendations of its own investigative team.

Balancing these stories against exclusive interviews with former U.N. ambassador John Bolton, former CIA Director James Woolsey, former U.N. weapons inspector Charles Duelfer, Nobel laureate Jody Williams, and others, U.N. ME  delivers an enlightening account of how the world’s foremost humanitarian organization has been used by dictators, thugs, and tyrants to line their own pockets. For more information on this powerful film, visit the film’s website: http://www.unmemovie.com/