Israeli films have had a strong profile at international film festivals and in the Oscar competitions for the past decade. For the next two weeks, New York area audiences will get a chance to sample the variety, dexterity and quality of contemporary Israeli films as the Israel Film Festival marks its 25th anniversary. The Festival runs through May 19 at the AMC Loews 84th Street Theater on Manhattan’s Upper West Side.  Over a dozen filmmakers will join us from Israel for their films, festival Q&As and gala celebrations.

Last night’s Opening Night film was the New York premiere of Nir Bergman’s INTIMATE GRAMMAR, which recently won the Best Feature Film Award from the Jerusalem International Film Festival as well as the Sakura Grand Prix from the Tokyo International Film Festival. The Opening Night ceremonies, which began with a VIP reception at the famed Plaza Hotel, were held at the adjacent Paris Theater, with the Awards Presentation followed by the film screening. 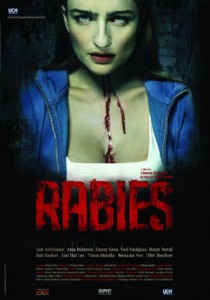 This year’s event will showcase 30 titles, including award-winning features, documentaries and television programs that have won awards and been featured on the international film festival circuit. Among the highlights are THE MATCHMAKER (Avi Nesher), a coming-of-age story set in 1968 that won 4 Israeli Academy Awards; INFILTRATION (Dover Kosashvili), an multi-character story about soldiers in combat adapted from one of Israeli literature’s most celebrated novels by author Yehoshua Kenaz; THIS IS SODOM (Adam Sanderson and Muli Segev), a wacky comedy set in the infamous city of Sodom that is the highest grossing Israeli film in the last 25 years; 2AM (Roi Werner), a witty satire on contemporary urban obsessions, particularly the never-ending search for the perfect parking space; RABIES (Navot Papushado & Aharon Keshales), Israel’s acclaimed and controversial first horror film that was enthusiastically received at last month’s Tribeca Film Festival; and SALSA TEL AVIV (Jorge Weller), a romantic comedy with music and salsa dancing, with a mostly Spanish script (a first for Israel).

Documentary subjects in this year’s strong non-fiction program range from a portrait of internationally celebrated author Amos Oz, to an environmental film that highlights Israel’s diverse geography, to the personal odyssey of a son’s investigation of the death of his disgraced military father, to the portrait of the hangman responsible for the death of notorious Nazi murder Adolf Eichmann, and STRANGERS NO MORE, winner of this year’s Best Short Documentary Oscar, a plea for multi-cultural peace and harmony.

The annual Panavision Audience Choice Award for Best Israeli Feature Film will be presented at the IFF’s Closing Night presentation.  The award carries a state-of-the-art Panavision package worth over $60,000 for the director and producer to use toward their next film shot in Israel.  For additional information on the films and programs and to purchase tickets to attend, visit: www.IsraelFilmFestival.com