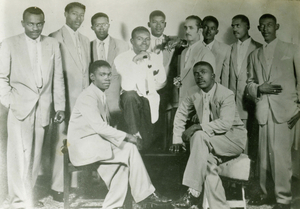 A sneak preview of the music documentary WHEN THE DRUM IS BEATING will be featured at the Tribeca Drive-In this evening as part of the Tribeca Film Festival. The screening will be followed by a free live concert by  Haiti’s beloved national band Orchestre Septentrional at the World Financial Center Plaza in Battery Park City in lower Manhattan.

WHEN THE DRUM IS BEATING is a feature documentary by director Whitney Dow about Haiti’s rich musical culture and the legendary band the Orchestre Septentrional. The film will have its official World Premiere on April 25 at the Tribeca Film Festival as part of the Spotlight section. Through its sweeping historical narrative and infectious music, WHEN THE DRUM IS BEATING captures the nuances and complexities that make Haiti one of the most fascinating countries in the hemisphere.  In his exploration of the “Haitian people’s band,” Dow delivers a humane and profound understanding of the pride, resistance, despair and rich artistic tradition of Haiti itself. 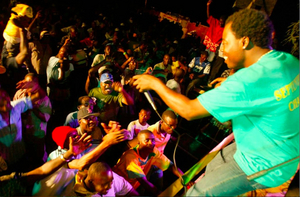 The story of Orchestre Septentrional and its continued existence in a country still reeling from last year’s devastating earthquake—-a place where little survives including governments, monuments, art works, cities, lives nor even the very landscape – is uniquely Haitian. Through its sweeping narrative, infectious music, tension-filled encounters and the musicians’ passionate dreams, the film goes to the core of the unique Haitian spirit.

The film is a co-production with the Independent Television Service (ITVS) in association with the National Black Programming Consortium (NBPC) with funding provided by the Corporation for Public Broadcasting, and produced in association with TV Ontario, with additional funding provided by the Sundance Institute Documentary Film Program. WHEN THE DRUM IS BEATING is slated for a PBS broadcast in 2012.