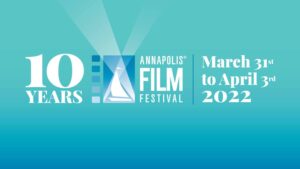 After two years of pandemic-caused virtual screenings, the Annapolis Film Festival—which runs March 31 to April 3—returns for its 2022 iteration with an in-person, live vengeance. With 30 feature-length films (17 narratives and 13 documentaries), plus 7 shorts programs (of 42 short films, with an additional short screened before one of the features), the viewing options are many. As always, Annapolis presents a series of curated events, as well, including spotlight films and film showcases. This just happens to also be the fest’s 10thanniversary, so expect nothing but great things.

In an email exchange, Director of Programming Derek Horne explained how he has bookended the 2022 festival with a chocolate theme: the opening Thursday night screening is of John Hay’s To Olivia, about how author Roald Dahl developed his beloved novel Charlie and the Chocolate Factory, and the closing Sunday screening is of Jonathan Keijser’s Peace by Chocolate, which tells the inspiring tale of how a family of Syrian refugees made a successful new life in Canada thanks to their popular chocolate factory. These are by far not the only highlights he mentions (and he is proud of the entire program, to be sure).

The three spotlight films are Friday night’s 892, from director Abi Damaris Corbin and starring John Boyega, about a tragically ill-fated bank robbery; Saturday afternoon’s Fire of Love, a documentary from director Sara Dosa about late volcanologists Katia and Maurice Krafft; and Saturday night’s Emily the Criminal, from director John Patton Ford and starring Aubrey Plaza, about how failure and the exigencies of the gig economy can push the desperate to make risky decisions. Horne points out that Annapolis is the first festival after Sundance to play this last one. So don’t miss it!

After a decade, it is no surprise that the festival is able to bring back alums of previous years. Returning with new film is Monica Levinson, who produced the 2018 opening-night movie Beirut and now comes with a documentary she co-directed, The Stories of Us (part of the Jewish Experience showcase). Abi Damaris Corbin (the aforementioned 892) won the 2018 Jury Award for her short The Suitcase. Max Walker-Silverman, whose A Love Song plays this year, had his short Lefty Righty at the 2020 festival; that same year, Ryan Mayers, who now returns with Walk with Frank, had his short The Million play. Finally, director John Chester, whose The Biggest Little Farm won the 2019 audience award, is back with a 30-minute sequel, The Biggest Little Farm: The Return. Many of the directors of these and other selections will attend the festival in person.

What follows are my recommendations of 5 movies to see, some of which I have previously reviewed at other festivals (in which case I excerpt from, and hyperlink the movie’s title to, that previous review). There are more that I like, but I thought I’d keep it simple. Still, just don’t take my word for it, check out the full program online. There is something for everyone.

Based on a real-life 2017 bank holdup near Atlanta, Georgia, 892 gives actor John Boyega (Naked Singularity) a juicy role as Brian Brown Easley, a former marine who, out of desperation over how Veterans Affairs was holding up a disability check, engaged in a reckless act to draw attention to his plight. Nicole Beharie (Miss Juneteenth) and the late Michael Kenneth Williams (HBO’s Lovecraft Country series)—in one of his final roles—also play important parts. The film presents the complexities of the issues in an engaging, tension-filled drama that is, by its sad conclusion, deeply poignant.

Another in a series of patented misfit roles from Aubrey Plaza (Black Bear), Emily may look familiar but is sui generis, steel born of hardship just below the seemingly placid exterior. We see flashes of it right away, in an opening job interview where the camera stays on her, in close-up, as a prospective employer queries her about the police record from the background check he ran. She lies, which then makes him ask more pointed questions, making her get up in a fury and leave. She’s no pushover. But just how far will she go? That is the question posed by John Patton Ford’s debut feature, Emily the Criminal. And though we do see what’s coming, there are still welcome surprises in store.

Director Rayka Zehtabchi, with her Oscar-winning short documentary Period. End of Sentence., demonstrated a firm cinematic commitment to highlighting women’s stories, particularly those surrounding menstruation. In her new nonfiction short, Long Line of Ladies, she is joined by Shaandiin Tome (Mud), and together they tell the tale of how the Karuk Tribe of northern California resurrected their long-defunct Ihuk, or Flower Dance Ceremony. As an opening title card informs us, “the ceremony was held for generations without interruption until the violence and destruction brought on by the Gold Rush, where Native American girls and women were victims of sexual violence.” Today, it is a joyful affair, and it is a joy to watch the central protagonist prepare for it. May we all celebrate girls becoming women in such a safe and loving environment. Interested? Check out this interview I conducted with the directors just before the 2022 SXSW Film Festival.

Hard-working actors Dale Dickey (Bloodline) and Wes Studi (Badland), most often seen in supporting work, each get a chance to shine as aging would-be lovers in Max Walker-Silverman’s A Love Song. A gentle tale of lives lived and loves lost and maybe found, the film follows Dickey’s Faye as she waits in a Colorado campground for a reunion with a long-ago school friend, Lito (Studi). A widow, she’s lonely for companionship, but also more than self-sufficient. When Lito finally arrives, their scenes together are filled with barely expressed feeling, a master class in subtle performance. Beautiful cinematography complements this lovely meditation on the human condition.

Another film based on a true story, Jonathan Keijser’s Peace by Chocolate tells us about the Hadhad family and their journey from war-torn Syria to Nova Scotia, where they were able to build a new life based on the foundations of the old one. Though son Tareq (Ayham Abou Ammar)—the first to arrive in remote Antigonish—wants nothing more than the opportunity to continue his medical studies, he soon finds himself helping his father, Issam (the late Hatem Ali, in his last role), as he starts doing what he’s always done: make chocolate. Before long, despite resistance from some locals who do not appreciate upstart immigrants, the Hadhads are well on their way to making Canada a welcome home. Filled with both humor and pathos, Peace by Chocolate is a tasty cinematic treat.

Again, for more information on all the festival’s offerings, visit its website. Enjoy!