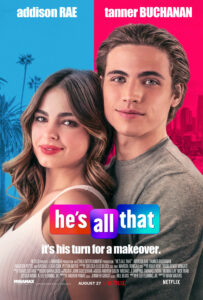 As far as remakes go, He’s All That is essentially the Disney Channel counterpart to the 1999 original, She’s All That. The original may have been seminal to sleepovers, but it is only so-so outside them. While this rendition, the latest in a line of Netflix teen rom-coms, turns down the charisma and turns on the syrupy sweetness, I would imagine it would still be fun but forgettable sleepover fare for a younger demographic. But while I don’t want to ungenerously compare the two, the original stays too close in the rearview to forget. And for a story about a boy who transforms a girl into a conventionally attractive version of herself on a bet, it’s difficult to look past the missed opportunity to modernize the material beyond swapping the genders and adding social media.

One of the most interesting moves He’s All That makes, however, is the choice to cast TikTok star Addison Rae in the lead role. What she may occasionally lack in charm, she often makes up for with the intrigue of her real-life persona and the natural ease with which she slips into the influencer archetype. Yet even with this added layer of social-media scorn, the film never quite has a grasp on what social media is actually like. Beyond under-emphasizing the role it plays in our lives, it lacks the complexity, silliness, and even vitriol of virtual interactions as we know them. And for some reason it still reverts to a number of tired oversimplified jabs about teens and their phones, something that I’m sure its young audience will love.

While the performances and characters are generally likeable, the strange online world this film presents distracts from them and makes their motives feel jarringly formulaic. For example, a series of calls from Kourtney Kardashian, who portrays some sort of brand manager, needlessly take away from the already drama-filled central plot. While they seem to have written this in to raise the stakes, none of the Kardashian interactions feel tangible or worthy of our investment to begin with. Plus, they feel entirely tangential to the film because they manage to feel like a commercial break and look like one, too, since the rest of the film’s aesthetic is completely absent within her scenes.

Moreover, it would certainly be easier to sympathize with these characters if they didn’t have all of the cruel or weak features of their original counterparts. Whatever exposition the writing does to justify why it’s okay for Rae’s character to make a bet to change a boy into being conventionally attractive continuously feels flimsy and uncreative. It’s hard not to think about the fun spins on the source we could’ve had in 2021, but what we get is average high-school movie drama played out by a group of stereotypical teens.

While it’s sweet and simple, He’s All That lacks a certain creativity. Then again, the original did, as well. While its look and feel are nearly identical to that of the many teen rom-coms released today, the worst part is that the narrative feels like it was pulled directly from a decade or two ago. It’s most valuable quality to offer is its light and uplifting familiarity which is all that’s really necessary for a movie like it.