Director Anton Corbijn ( “Control”) working from screenwriter Rowan Joffe’s adaptation of a Martin Booth novel, “A Very Private Gentleman” has crafted a compelling and existential tale of an arms dealer and hit man.  Playing the assassin named Jack is George Clooney in one of his better performances. 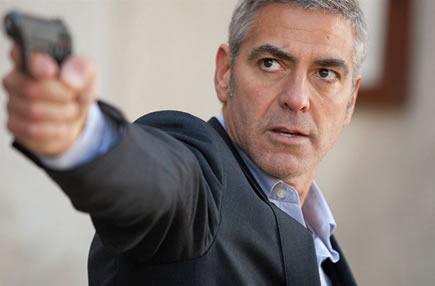 Corbijn, who hails from the Netherlands, is a noted still portrait photographer and he brings this strength to the table in creating an impeccable study of Mr. Clooney’s physiognomy as he unfolds a melancholy tale punctuated by spurts of intense violence.  Jack (Clooney) is a veteran killer who is weary that his life may end any moment he lapses into complacency. The film unfolds as a European art movie and not an action thriller. Yet, when action unfolds it is riveting and unnerving.  Beginning in a Swedish forest and moving to an Italian hill town, Jack’s cover occupation is that of an architectural photographer.  Taking instructions from a mysterious boss in Rome, Jack befriends a local Italian priest, a prostitute( the beautiful and alluring Violante Placido) and meets up with a client named Mathide (Dutch actress Thekla Reuten of “In Bruges”).  We observe Jack’s skills as a weapons expert as he custom designs weaponry and multiplies the “killing power” of a bullet by filling its hollow shell with the heavy metal mercury.

Without much back-story we are forced to bring our own sensibilities to this grim story. Jack is shown to be living in a very dark world which will ultimately determine his fate. This unusual and aesthetically wonderful film is worth your attention.