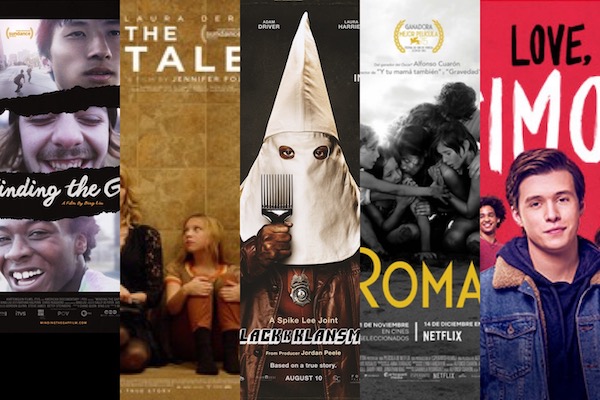 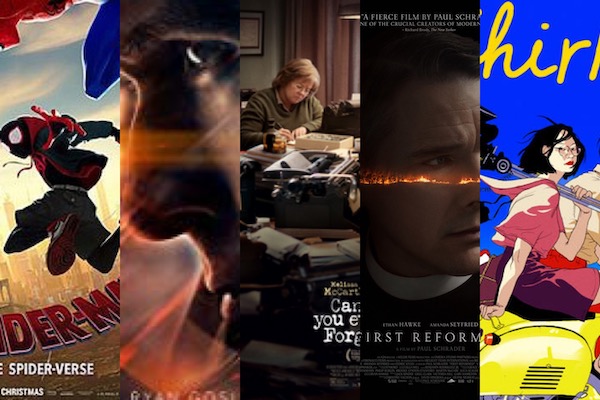 2018 in film proves itself no stranger to the outpouring of cinema that responds to the worsening political climate we find ourselves in. The desperate need for connection and kindness bleeds into nearly every corner of this year’s narratives. It has provided us with a collection of films dedicated to both observing humanity and providing it. This has brought about the revival of the romcom, a golden age for documentary, and the resultant torrent of comprehensive character studies. You’ll find that this theme runs through this list as well. So, without further ado, here are my top ten films of this wild and wonderful year:

An unexpected foray into the realities of skateboarders’ growing pains as they confront their worsening class struggles and their experiences with domestic abuse, Minding the Gap boasts three incredibly emotive subjects and a rounded commentary on masculinity within American life. Between its existential perspective on the nature of skateboarding, it carefully comments on the sport as both a cultural zeitgeist and a commonly necessary source of therapeutic refuge.

Here we get Spike Lee at his most self-indulgent and his most formally astute. Lee has crafted a film that overrides subtlety to effectively highlight the problem of contemporary American racial perceptions and make the audience as angry about them as they should be (very). And with John David Washington and Adam Driver at the helm, it emerges as a terrifying, disheartening, compelling, and effectively funny entry into Lee’s oeuvre. And on to another auteur…

While I remain unconvinced that this is as strong as Cuarón’s earlier works, Children of Men and Y Tu Mamá También, the latest in his line of subtextually political films guided through a lens of social institutions is perhaps his most moving. Roma is a testament to the growing necessity of Mexican cinema, the talent that is Alfonso Cuarón, and the beauty of the city that holds his heart. The artful blocking of Cuarón’s photography and the powerfully warm presence of Yalitza Aparicio create an extraordinarily intimate, personal vision of Cuarón’s lived and shared experience that solidifies him as one of the most important living filmmakers.

This gloriously fluffy studio film delves out tenderness by the armfuls in its quest to show that everyone deserves a love story. While approached with simplicity, Love, Simon presents a layered look into modern relationships and punctuates them with moments of sincere humanism. Teenage anxiety and the excitement of unrealized love is fully realized over the blue lights of computer screens and the romantic guitar of Waterloo Sunset. Simon Spiers’ marked normalcy transposed into an experience of otherness in a transforming, but not fully accepting world becomes its own unexpectedly warm invitation to embrace who you are.

This weighty autobiopic from documentarian Jennifer Fox clearly understands the oft-misunderstood nature of traumatic experience and the way that our memory is shaped by it. The Tale is a rare instance where documentary and fiction are interwoven to imperfectly create perfection, blurring the lines between our connection to our world and the stories we tell ourselves in order to survive in it. It is a film about fear that is entirely unafraid to delicately, yet thoroughly delve into the nuances of traumatic experience that are too commonly dichotomized into unwavering shades of black and white. It leaves us with no answers because it understands that it has none to offer, save the knowledge of the empty exhaustion of confronting one’s perception of individual autonomy and the realized lack of it in a world largely bookended by structural inhumanity.

5. Spider-Man Into the Spider-Verse

This was probably the most fun I’ve had at the movies all year. What an endlessly cool, wondrously designed, refreshingly diverse origin story. Positioned against the superhero-obsessed market this film is working against, this rendition of your friendly neighborhood superhero revitalizes the genre and reestablishes the core values that Spider-Man (and all superheroes, really) is all about.

I’ve always been very jealous of Damien Chazelle. Despite always enjoying his work, I search very hard to find the small, inscrutable issues that I can use to argue about with his fans. I don’t think I am able to do this with First Man. He isn’t making a story about musicians this time, but it certainly proves to be a masterful exploration of the use of sound and abstract musicality to comprehend one’s inner psyche. Both he and Gosling exercise an admirable level of restraint to create a haunting image of personal drive and grief. Slipping into their soft blue abyss of matter and space brought a surprisingly accessible meditation on the craters of emptiness we contain within ourselves.

3. Can You Ever Forgive Me?

An intensely harrowing look into people’s dreams, the isolation of urban life, and the beauty of human empathy. It is so good because it is so clear that the filmmakers wholly give themselves to the realms of the narrative. And yes, the relationship between Melissa McCarthy and Richard E. Grant is a thing of dreams.

This is a film that feels both timeless and like it could have only been made at this exact moment in time. It is a perfectly executed examination of the nervous dread that has overcome a globalized society driven by a perpetually worsening worldview. Ethan Hawke establishes himself yet again as one of the most perceptive forces on screen. Paul Schrader matches this with distinguished technical precision and an unbridled sensitivity to character. It made me fall in love with film as a medium just as much as it made me angry and sad and existentially terrified of the world around us.

This was one of the first films that I watched of the year, and it has shaped the way I view and experience every film that I have seen since. Sandi Tan’s Shirkers is like falling into a surreal universe of lush textures and sound. It is a sprawling love letter to the places and people and passions that we earnestly devote our lives to. It understands the personal nature of artistic expression and the distinct dynamic of being a young woman creating art in a way that not many others do. Never have I seen such an acutely articulated rumination on the ideas of how memory repackages loss and how internalized grief jades our perception of our past. It reaffirms not only the vitality of the artist but the act of filmmaking as a whole. To revisit it is to allow yourself to be vulnerable. When trying to understand the heartbreak that had to be revisited in order for this film to exist, I only have one thing to say: thank you, Sandi Tan.