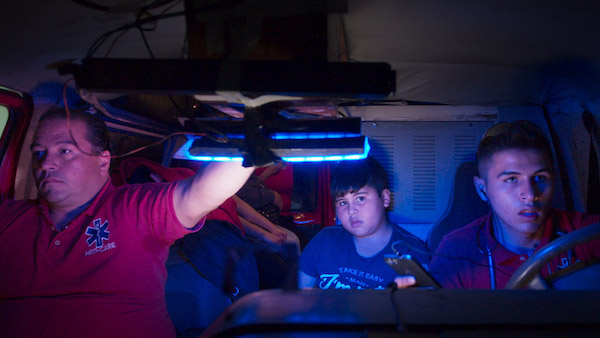 A teenage boy makes late night phone calls to his girlfriend after a long night at work. He tells her about his job. It seems very ordinary until he starts describing the graphic details of watching the spectacle of someone whose blood is running down their face or the exciting account of how he wasn’t able to make it to the hospital in time to save a girl who was in an accident. His family owns an ambulance service. This is what Midnight Family is about.

There are 45 public ambulances to cater to each one of Mexico City’s nine million people. This is a statistic laid out at the beginning of Luke Lorentzen’s challenging Sundance U.S. Documentary that my mind was unable to escape for the remaining ninety minutes. Lacking the necessary infrastructure to provide the necessary level of care for the country, a large number of for-profit small business ambulance services have sprung up in its wake. The one Lorentzen zeroes in on is run by a family, the Ochoa’s, to which the aforementioned boy belongs to. With every added patient the Ochoa’s help, this statistic grows at first more thrilling, then more enraging.

The philosophical territory this movie wades into astutely, yet subtly examines the connection between Mexico City’s structural pitfalls and the ideas of necessary suffering and moral urgency. Midnight Family sees the Ochoa’s in the place of the moralistic bystander and the government as God. They must exist because there is no visible help from the above power, and the above power is imperceptible due to the presence of the moralistic bystander. The problem here is that the Ochoa’s situation is not meant to accumulate morality, but capital, which is typically an immoral pursuit. Because of this, the government is able to continue to provide the least amount of support not only to their people, but to these organizations, and the ones dependent upon them are able to negate their pleas based upon their association to civilian altruism. The philosophical boundaries presented here are so interesting because they are applied so realistically. Each of the subjects has a sense of how these concepts apply to their lives, but none of them seem ready to acknowledge the larger, systemic problem causing them. 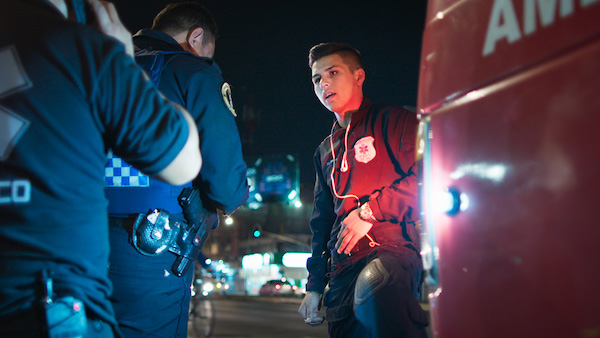 This is the essence of the film’s central dilemma. The most essential virtue of it, however, is its lens of humanity through which it sees this struggle. Even with its staunchly vérité style of insight, it finds its subject to be constantly wanting, caring, and vulnerable beings, people first and products of a flawed system second. Here, a woman dealing with domestic violence is directly contrasted with a baby at the hands of an uncaring parent. They both are rendered needing beings, broken down to their most elemental need for comfort. The Ochoa’s are not that different. This film understands that suffering is not one size fits all, it is a dynamic entity that can transpire both as an unexpected car crash or the slow burn of watching your family struggle to pay for food.

The grace of the director’s fly on the wall aesthetic juxtaposed with a keen directness while filming the family during their downtime creates a tug and pull between one’s level of comfort and proximity to the subjects. At times you are part of the family, at others you are miles away from them. The more the pendulum swings, the more you question the rightness of this entity and the more the decaying national infrastructure comes into the foreground.

No questions have clear answers in Midnight Family. There are three things that can, however, be known. First, the Ochoa’s are fighting a difficult, and most probably admirable, fight. Second, healthcare is a broken system that must be reconsidered on a national level. And lastly, this film is a political and emotional powerhouse that deserves to be seen.