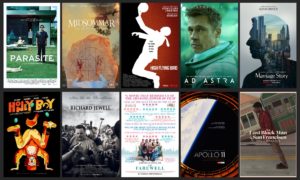 Top ten lists are strange. It seems futile to sort and order films so different in scope and subject into a single list, and yet here we are. But while the films listed below may vary in terms of story and scale, there was a running narrative of cultural and class connections, character-devoted storytelling, and timely reflections of past and present that largely defined the films that affected me the most this past year. While there are a number of releases I have yet to see, namely the Safdies’ Uncut Gems and Terrence Malick’s A Hidden Life, as well as a few others which I suspect may replace a few spots on my list, below is my top ten as it currently stands. As the final year of this decade draws to a close, these are the films that, for me, in the essence of the words Adam Driver sings in my number five slot, cinematically best defined and explored being alive.

Hannah Tran is a film critic and filmmaker from Las Vegas, Nevada. She is currently studying film and English at the University of Nevada, Las Vegas. In addition to her studies, Hannah works as a film screener for the Las Vegas Film Festival and publishes an independent zine focused on highlighing Asian American filmmaking.