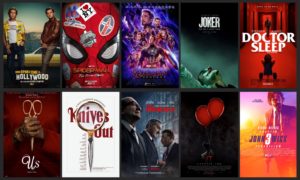 I didn’t see as many films as I’d have liked to this year, and surely haven’t seen as many as the other critics on this site, so my list will probably look quite different than most of theirs. For me, 2019 was a year of highly anticipated conclusions to many sagas, so you will see a few of those grandiose films represented here on this list (IT: Chapter Two and Avengers: Endgame), and one omission of an extremely underwhelming finale (Star Wars: The Rise of Skywalker). The year was also full of surprisingly high-quality sequels and spin-offs. As an avid horror fanatic, my list is made up of about half thriller/horror/mystery films. However, my number one film of the year is an original film that combines many different genre elements into one. Great comedy, tense moments, and entertaining action sequences all make of Once Upon a Time … in Hollywood a well-written and exquisitely directed love letter to classic Hollywood, with memorable performances and an amazing finale.