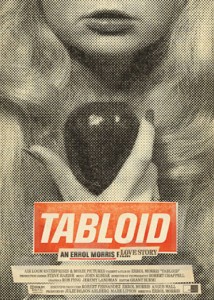 Oscar winning documentarian Errol Morris has had more than his share of interesting interview subjects in his 30 year plus career, but perhaps none is quite as gonzo as the one he captures in his new film TABLOID, which opens in limited release this week (and is available on most VOD platforms). The film focuses on the bizarre-but-true story of Joyce McKinney, a former Miss Wyoming beauty queen who became a notorious tabloid sensation in the 1970s when she snatched her Mormon boyfriend away from his London mission and chained him to the bed while she attempted to fuck the religion about of him. Her sexscapades become headline news in the UK, and then in the US, where she fled after the former lover brought kidnapping charges against her. In this film, the famed filmmaker not only brings us a stranger-than-fiction story filled with sex, intrigue and religious fundamentalism, but also makes a comment on the origins of our celebrity-obsessed tabloid culture where privacy is no longer an option.

Seen recounting her story in close-up interviews, McKinney is a spacey, yet engaging subject, a hopeless romantic given to loopy bursts of laughter and odd non sequiturs. One gets the strong sense that every word that comes out of her mouth is a total and complete lie….albeit one that she believes herself. In his customary style, Morris digs at what may be the truth and what remains only knowable to the parties involved, inviting both our perusal and condemnation in a love/hate obsession with the story as strong as the love/hate relationship between the two protagonists. The film may not get us any closer to the true facts of McKinney’s case, but like a breezy tabloid read, it makes for a diverting if somewhat guilty pleasure. 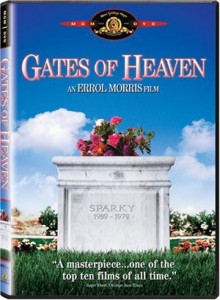 Morris has been providing us with a mirror to measure our interests, obsessions and fears for over three decades now, beginning with his celebrated debut GATES OF HEAVEN (1978), a Diane Arbus-like examination of pet cemeteries and the people who frequent them. Morris, who was born on Long Island in 1948, became obsessed with films he saw as a boy on local television, knowing at a very early age that he wanted a career in cinema…..,although he said later that he did not even know that working in non-fiction was even a career option. During his stint at University of California Berkeley in the early 1970s, he studied philosophy and also became a regular at the Pacific Film Archive, educating himself on cinema history. At the Archives, he made the acquaintance of German director Werner Herzog who was working in the Bay Area at the time. Herzog loaned him several thousand dollars which allowed him to shoot his debut film in nearby Napa Valley. GATES OF HEAVEN became a critical hit and and received a limited release in 1981 (before documentaries in theaters hit their stride). In the intervening years, the film has emerged as a certifiable cult hit on video and DVD.

His follow up film VERNON, FLORIDA, also chronicled society oddballs, particularly the residents of this Florida hamlet who offered their limbs in exchange for money. The film had its premiere at the 1981 New York Film Festival and also found a small distributor to take it out in 1983. It gained its cult status when it was released on video in 1987 and then on DVD in 2005. With these two early efforts, Morris had established his name as a new voice in documentary film, a filmmaker who eschewed the “direct cinema” style for a more expressionistic approach.

Of course, this made him a controversial figure in the documentary film community, since it was still believed that documentarians should serve as silent witnesses and the camera should be invisible. Morris was one of the first to say that this was nonsense, that the mere presence of a camera changed the story and the responses of the storytellers and that objectivity was not ever possible. He pursued a subjective approach, using dramatic re-enactments and soundtrack scores to point out that audiences were indeed watching a film rather than a video diary. He never hesitated to put in his own signatures, giving a whole generation of documentarians the permission to pursue a more personalized, cinematic approach to the form. 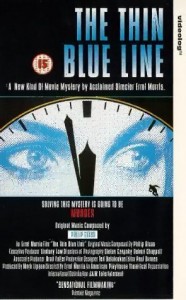 His next film became a true sensation. He turns his camera to the trial and conviction of Randall Adams, a Texan who was found guilty of killing his former boss in a particularly brutal manner. After being sentenced to life imprisonment for the crime, Adams recanted his forced confession and began a campaign to clear his name and be released from prison. Morris, whose personal resume has also included work as a private investigator,  went to work on the case, drawing not only on interviews with Adams himself, but most damningly, illuminating unedited interviews in which the prosecution’s witnesses systematically contradicted themselves. After years of incarceration and a particularly cold blooded ruling by a Texas judge that the videotapes would not be admissable, THE THIN BLUE LINE (1988) created a popular sensation and was the catalyst for Randall Adams to be eventually be released from prison. The film was cited as one of the year’s best in critics’ lists and won the Documentary of the Year award from both the New York Film Critics Circle and the National Society of Film Critics. Despite its widespread acclaim, it was not nominated for an Oscar, which created a small scandal regarding the nomination practices of the Academy. The Academy cited the film’s genre of “non-fiction”, arguing that it was not actually a documentary.

In the 1990s, Morris worked on both documentary films and became an award-winning (and highly paid) maker of television and cinema commercials. Among his best known documentary features of the period were A BRIEF HISTORY OF TIME (1991), FAST, CHEAP AND OUT OF CONTROL (1997), MR. DEATH: THE RISE AND FALL OF FRED A. LEUCHTER JR (1999) and FIRST PERSON (2000). His earlier snub for the Best Documentary Oscar was rectified in 2003, when his fascinating film THE FOG OF WAR: ELEVEN LESSONS FROM THE LIFE OF ROBERT S. MCNAMARA won him the coveted prize. In the film, the former Secretary of Defense under both the Johnson and Nixon administrations, admitted to decisions made in the Vietnam War that were not transparent and were, in retrospect, highly damaging to both the fighting soldiers and the country as a whole. The film served as a kind of religious confession from a former war hawk who ended up criticizing his former colleagues for their macho excesses and the cost of the lives of brave fighting men and women.

Since 2003, Morris has followed up with only one feature film, STANDARD OPERATING PROCEDURE (2008), which examined the secrets and lies of yet another conflict, this one in Iraq and Afghanistan. The film, one of the first bracing criticisms of the dual wars, demonstrated how America had not really learned the lessons of Vietnam and was blatantly repeating the same patterns that had so damaged our country forty years earlier. Since his output in the last decade has been so limited (with television commercials being a more lucrative pursuit), the release of a new film by Errol Morris is indeed cause for celebration and renewed interest in his singular style. TABLOID has been an international hit on the film festival circuit and finally makes its long awaited debut via the Sundance Selects banner. Learn more and join the discussion on http://www.sundanceselects.com/films/tabloid.