What a torture! Director Steven Spielberg and screenwriter Tony Kushner turn the hallowed figure of Abraham Lincoln into a dreary sop. The list of well-established actors who show up in cameos must have quickly sized up Daniel Day-Lewis’s portrayal as Lincoln. The only thing they could do to add drama and some zest to the muddy, verbose monologues was to ham it way up. 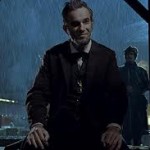 With Day Lewis’s probably highly accurate characterization of a closed off, stoic Lincoln without an ounce of charisma, the supporting big name actors shout, slam fists and do everything in their bag of actor tricks to liven up the scenery. They all come off as buffoons yelling at the president.

Lincoln’s folk charm and insistence on telling parables in the middle of the Civil War deflates his image as “The Great Emancipator.” All the while, his wife Mary Todd Lincoln (Sally Field) keeps telling everyone how beloved her husband is.

Spielberg’s sappy film opens with Yankee boy soldiers stumbling through small talk with Lincoln on the battlefield. They might have heard his famous speech, but it is the Negro soldiers who know Lincoln’s Gettysburg Address by heart. 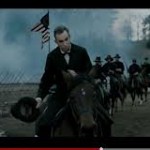 incoln is the pater familias of African Americans. Steven Spielberg is the pater familias of Hollwyood and the father of two adopted black children. Perhaps this is the reason Spielberg decided to take the last four months of Lincoln’s presidency from Doris Kearns Goodwin’s book, Team of Rivals: The Political Genius of Abraham Lincoln (2005) and film it on a Hollywood backlot.

It looks like lazy filmmaking. And the big dramatic ending to Lincoln’s life? It is mentioned.

In plowing us through Lincoln’s manipulations for ending the Civil War through abolishing slavery in the South, it takes an astute ear to hear that it was done entirely for political reasons. Lincoln knew that if the South had no slaves, it would cripple their economy. Without slaves, the South had no one to grow crops for food, or do most of the unskilled labor. If there was no one to grow food, the Army starved, and if the Confederate Army starved, the US Army would win.

Did anyone ask where four million slaves would go?

Spielberg and screenwriter Kushner do not bother to give us a complicated Lincoln. What about all those homosexual rumors that were quite well known and written about during his life? Lincoln wrote a poem that described a marriage-like relation between two men. He slept in a bed with men his whole life.

Not that there is anything wrong with that.

Commentary on Lincoln’s sexuality has existed for some time but re-entered the public in 2005 with the posthumous publication of C. A. Tripp’s book The Intimate World of Abraham Lincoln.

Captain David Derickson was Lincoln’s bodyguard and companion between September 1862 and April 1863. They shared a bed during the absences of Lincoln’s wife, until Derickson was promoted in 1863. Derickson was twice married and fathered ten children, but whatever the exact level of intimacy of the relationship, it was the subject of gossip. Elizabeth Woodbury Fox, the wife of Lincoln’s naval aide, wrote in her diary for November 16, 1862, “Tish says, ‘Oh, there is a Bucktail soldier here devoted to the president, drives with him, and when Mrs. L is not home, sleeps with him. What stuff!” 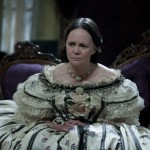 Prominent in LINCOLN is the Lincoln marriage. Abe was afraid of his wife? And what of Mary Todd Lincoln’s mental state? Did her mental illness only surface after Abe’s death? Ten years after Abraham Lincoln’s assassination, a Chicago court declared his 56-year-old widow Mary insane and committed her to a mental institution.

Robert Todd Lincoln, the president’s eldest son and a practicing attorney, arranged the insanity trial of his mother after agonizing over her erratic behavior. He understood Illinois law, which required a jury trial for involuntary commitment to a mental institution. Mary’s defense attorney did not contest the case, and allowed 17 witnesses to testify to her unstable condition, while not calling any witnesses of his own. During the trial, Robert testified, “I have no doubt my mother is insane. She has long been a source of great anxiety to me.”

We see no trace of Mary’s future mental condition in LINCOLN outside of never getting over the death of their 11-year-old son. If the relationship between Abe and Mary had been developed, it certainly could have earned Field an Academy Award. In fact, the one scene where Abe and Mary fight is the only powerful scene in the film. Begrudgingly, Kushner allows Mary to admit that Abe had tried to get out of marrying her.

Field has said she fought hard to win the role, even auditioning – highly unusual for an Academy Award winning star. Field told Spielberg:

Field then demanded that Spielberg screen test her. He honored her request, but tested her alone, editing her onto film with older footage of Day-Lewis. The mega-director still wasn’t convinced and told her so.

Day-Lewis graciously flew from Ireland to Los Angeles to test with Field because, as she recalled, “he felt Steven needed to see us on film.” http://movies.yahoo.com/blogs/movie-talk/sally-field-steven-spielberg-won-t-let-walk-190803228.html

Day-Lewis’s insistence on showing us Abraham Lincoln as he was, instead of giving him a booming baritone voice and electrifying presence, is remarkable and a tribute to his craft. He does embody the character and you can actually see Day-Lewis thinking as Lincoln.

Spielberg never shows us why the country idolized Lincoln. The long speeches are dull and cripple the film. Did Lincoln achieve the presidency with folk charm? Where was his ruthlessness? Politics is not pretty. His conniving, illegal ways to get members of the Senate to vote for abolishing slavery show a glimmer of political savvy. There must have been a keen street-fighter in Lincoln instead of the grandpa Spielberg highlights here. Lincoln is no Daniel Plainview but a mythical creation.