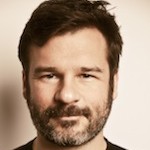 Goldman brings a wealth of development experience to Warrior Poets with over 15 years of creating and overseeing the development of numerous projects spanning film, television, and broadband at several networks and production companies, including tenure with MTV Networks, as well as running the television division of Original Media where he collaborated on the development of hit series such as Storm Chasers, LA Ink, and The Rachel Zoe Project. Most recently, he was Senior Vice President of Series and Development at Ish Entertainment where he developed projects for Oxygen (Brooklyn 11223), Bravo (The Approval Matrix), Comedy Central (Patrice O’Neal’s Guide to White People), and Travel Channel (Diplo’s Never Going Home). While at Ish, Goldman also played an instrumental role in launching MyIsh, a music discovery platform on YouTube, as well as contributing creative to the upcoming Jay-Z channel, Life + Times. Prior to Ish, Goldman served as a creative consultant to AMC, truTV, and Fuse.

“As our production company continues to grow, it is important to bring on an executive like Goldman who not only has a great resume of previous work, but also possesses a vision of what the future may hold,” states Warrior Poets founder Morgan Spurlock. “Our brand of program creation has always pushed the boundaries and now encompasses all media platforms including film, television, and new media. With Ethan on our team, we will cut even more unique pathways.”

Goldman’s hiring comes on the heels of Warrior Poets’ international first look deal with FremantleMedia Enterprises, and his responsibilities will include developing content for both Warrior Poets domestic and worldwide outputs through FME.

“I have long been an admirer of Ethan and his work,” says Jeff Tahler, Senior Vice President, Acquisitions & Development – Global Content for FremantleMedia Enterprises.

“He makes a great addition to the Warrior Poets team and will be instrumental in bringing a unique vision and voice to their projects. We look forward to working with him.”

About Warrior Poets
Warrior Poets, the New York based production company founded in 2004 by Morgan Spurlock, has produced multiple award winning films and television programs. Films include The Greatest Movie Ever Sold, Freakonomics, Where in the World is Osama bin Laden?, Comic-Con: Episode IV – A Fan’s Hope, and Mansome. Television projects include the award winning FX series 30 Days, ESPN’s The Dotted Line, the Emmy and Writer’s Guild nominated The Simpsons 20th Anniversary Special in 3D on Ice!, Hulu’s A Day in the Life, Failure Club and Mansome on Yahoo!, & Morgan Spurlock’s New Britannia for Sky Atlantic HD.