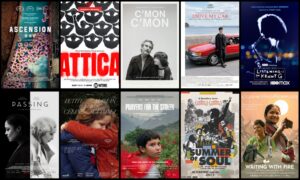 This last year saw me once again attend in-person screenings (at least a few). A Quiet Place Part II was my first such movie, and while it comes nowhere near my favorites of 2021 (as it did for my Film Festival Today colleagues Matt Patti and Adam Vaughn), I did enjoy it; it was no doubt enhanced by the theatrical experience. Still, most of what I saw over the past 12 months I watched at home via link, though I managed to make it to one live film festival (Middleburg) for a return to something resembling pre-Covid life. One surprising aspect of the pandemic has been the steady flow of cinematic releases, whether from content already in the pipeline when the world shut down or new material produced under strict health-and-safety guidelines since then. In short, there are as many films, movies, and shows to watch as ever, no matter where one chooses to see them.

Which brings us to my 2021 Top 10, listed below in alphabetical order. I pull these choices from the two separate lists I already published at Hammer to Nail (where I am lead film critic). I will soon, on my blog, publish a longer list, with additional runners-up and honorable mentions. Where I have previously reviewed a film (which is the case for 9 out of 10 of these), I hyperlink the titles to those reviews (whether on this site or on Hammer to Nail). For the one I did not get a chance to review, I write a brief capsule of my thoughts and link to the movie’s website. Enjoy!