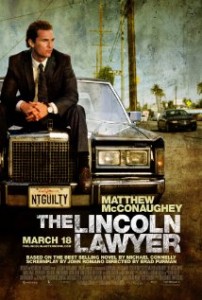 Adapted from Michael Connelly’s best selling book of the same title, “The Lincoln Lawyer” is one terrific movie with a touch of grit and a story that grabs your attention.  The film is directed by Brad Furman (“The Take”) and written by veteran crime screenwriter John Ramano. It provides an opportunity for its star, Matthew McConaughey, to shine brighter than his bleached white teeth .and his notorious six pack abs.

McConaughey plays a slick Los Angeles criminal defense attorney, Mickey Haller, a bottom- feeder whose office is in the back of a dated Lincoln Town Car and whose clients pay him with wads of greenbacks.

The story, and it is intense, largely rests on a case that looks predictable or, as one of Mick’s bail bondsman, Val (John Leguizamo) proclaims is a jackpot. A rich kid Louis Roulet (Ryan Phillippe) did or did not beat up a woman, and his upper-crust Beverly Hills mother (Frances Fisher) has a large enough bank balance to grab Mickey’s attention and devotion.  With the help of a seedy investigator (William H. Macy), Haller begins to build his defense discovering complications in his case well beyond his expectations.

There are ample pleasures in the telling of this story that you’re happy to be in the company of Haller and friends.  The author of the book upon which all of this is based was a devotee of Raymond Chandler and it has the noir feel to most of it.  While not on the level of a film like “The Verdict”, it is reminiscent of “Harper”, “Out of Sight” and “Jackie Brown”.

“The Lincoln Lawyer”   is so good that it has franchise potential.  Only time and the ensuing box office results will tell us for sure.