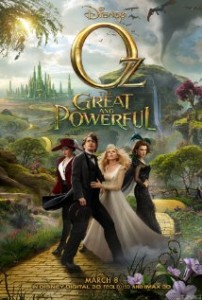 Director Sam Raimi’s 3-D CGI fantasy is a fractured prequel to one of America’s most beloved films of all time— “The Wizard of Oz” (1939). The Wizard is played by James Franco and much like the character played by Frank Morgan in the original film he is a charlatan of sorts. The film begins with a wonderful black and white look at a carnival in Kansas of 1905.  Having angered the circus strong man by hitting on his girlfriend, magician Oscar Diggs (James Franco) hightails it onto a hot-air balloon which is engulfed by a tornado and sent hurtling into Oz as the film switches to glorious Technicolor.

Oscar wants to be a great man but seems to lack the character to achieve his aspiration.  The film is a sort of series of adventures which will allow him to grow into a better person.  Our hero encounters three strikingly beautiful witches played by Mila Kunis, Rachel Weisz and Michelle Williams, all who believe him to be a mystical visitor who will save their land from doom and gloom. But we also know that one of these witches will become evil and try to destroy our hero.

Oscar, as did Dorothy in the 1939 film, sets off down the yellow brick road with the added intent of stealing the wand of the wicked witch.   Along the way he meets a flying monkey (Zach Braff), saves a broken China Girl (Joey King) and floats in a giant soap bubble.  But, what is lacking in this film, written by Mitchell Kapner and David Lindsay-Abaire, is any sense of drama and the one note performance from Mila Kunis doesn’t help.

Like many of these big budget films green- lighted in Hollywood these days this film lacks heart- something ironically sought so desperately by the Tin Man.