Ex-con John Taylor (Clayne Crawford) has just robbed a bank. He has a perfect getaway but after getting caught up in a convenience store robbery and cutting his foot, he is on the run.

Going through a few mail boxes, he finds a postcard from “Julia” in Australia. John goes to the man’s house and tells him he’s a friend of Julia’s and needs to make a phone call – his luggage was lost at the airport and he was mugged. 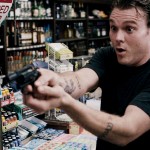 He’s got one of those Richard Neutra-like homes that say nothing about who the owner is, except that he’s wealthy and keeps his house immaculately clutter free and clean.

Warwick invites John to stay for dinner and offers him a glass of wine. When John begins to feel his true identity will be exposed, he tells Warwick he is staying and plans to kill him – unless his mind is changed.

Warwick Wilson: [threatened at knifepoint] You can’t kill me, I’m having a dinner party.

John wakes up tied to a chair having been drugged by Warwick. 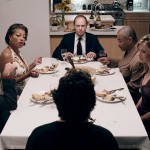 In this DEATHTRAP-style game of one-upmanship the advantage keeps shifting. A new side of Warwick emerges, and he demands John play a role as a dinner
guest at his party. The clever script is a gem.

It would be unfair to give any more details about the plot and
ruin the cunning twists. 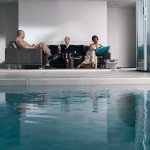 Pierce has three characters to play: the fussy, gracious host, the insane partier, and his last and most effective, real life personality. Pierce is so good, he’s enthralling. Pierce is equally matched by Crawford, who also has several different personalities that are revealed in the film.

Co-writer, with Krishna Jones, director Nick Tomnay takes a small budget and enhances his cast with sharp dialogue and shows a streak of imaginative cruelty.