On the surface, the family looks perfect. But Belle’s starved-scared demeanor and Peggy’s traumatized look telegraphs that all is not as it seems. While Peggy is failing at school and a teacher is concerned, Brian is developing into a bully – just like his father.

On one of his hunting jaunts, Chris spies a feral woman (Pollyanna McIntosh), living in the woods.

This feral creature is mesmerizing.

Chris has plans for the feral woman. Capturing her with a net, he takes her to a ground cellar and suspends her in chains. The feral woman cannot speak but grunts and in her first exposure to Chris, bites off his finger. This, of course, justifies Chris’s cruel and sadist behavior towards the woman.

But it gets more shocking. 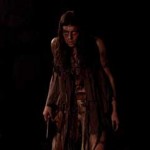 Chris gleefully brings together the entire family to view his capture. They are all going to work to rehabilitate her and teach her to become a functioning member of society.

The family not only agrees, they help.

But first she must be cleaned up – by a high-powered hose – and fed like a dog. Brian, whose duties include cleaning up their starving dog’s pen and throwing some food at him, is also enlisted to clean up the woman’s excrement.

Belle makes the woman a dress with handy access to her body. Soon enough, Chris slips out of their bed at night to visit the woman. Brian has made a peephole to watch the woman and soon follows in his father’s footsteps.

It is Belle who cannot take the situation any longer and shrieks at Chris. She wants a divorce. He beats her into unconsciousness in front of the children.

Peggy’s teacher Miss Raton (Carlee Baker) decides that her too-big clothes, refusal to engage in sports and nausea indicates she is pregnant. She goes to visit the Cleeks and tell them. Miss Raton picked the wrong day.

The worm has turned.

Reminds me of the family dynamics of Ivan IV of Russia.*

What follows is shocking, horrific, and truly unexpected.

Pollyanna McIntosh is phenomenal. Without speaking, we know exactly what she is thinking as each member of the family interacts with her. McIntosh never compromises. I believed her. The cast is perfect, especially Bridgers, who will always be remembered for this role.

Directed with skill and unleashed horror by Lucky McKee and scripted by Jack Ketchum and Mr. McKee, based on their novel.  I want to mention the director of photography, Alex Vendler, and the editor, Zach Passero, for their contribution to making THE WOMAN a terrifying movie.

I want a sequel.

*Also known as Ivan the Terrible, he became the first ruler of Russia to assume the title of Tsar in 1547. Every day between 500 to 1000 people were gathered from the city of Novgorod and were tortured and killed in front of him and his son. He was also responsible for the miscarriage of his daughter-in-law, whom he physically abused for dressing up immodestly, and the death of his son, whom he accidentally struck with a pointed staff during the argument that followed his daughter-in-law’s miscarriage.

My weekly column, “The Devil’s Hammer,” is posted every Monday.http://www.fromthebalcony.com/editorials.php.

If you would like to be included on my private distribution list for a weekly preview, just email me at masauu@aol.com.